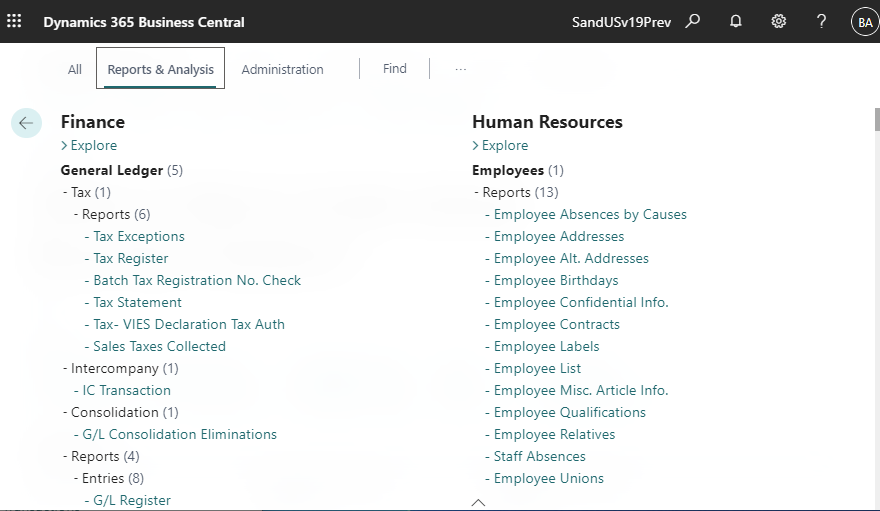 The feature list view in the Roles Explorer was enhanced. This is a new feature added in D365BC 2021 release wave2 and brings back some of the functionality that used to exist in NAV.
Discovering reports and administration areas in Role Explorer | Microsoft Docs

1. Compare the old version with the new version

The front side is the previous version (v18) and the back side is the new version (v19). Click the button circled in red on the page that appears immediately after you sign in to BC.

Then a list of features according to the role center you are currently using (Business Manager in this example) will be displayed. Now click on the button with the red frame, which in v18 is called ‘Explore All’ but is now called ‘Explore more roles’.

Then all the features will be displayed, regardless of the role center you are currently using. The items displayed at the top of the page are different between the current version (v18) and the new version (v19).

The following explanation is based on the screen of the new version (v19Preview) only. Three buttons have been added: ‘All’, ‘Report & Analysis’, and ‘Administration’. By default, ‘All’ is displayed and selected, and all functions are displayed. For example, in the Finance category, the following functions are displayed. Now let’s click on ‘Report & Analysis’.

The functions are filtered and displayed as shown below. What is the criteria for this filtering?

As a matter of fact, each function is assigned an area attribute such as ‘Report & Analysis’ or ‘Administration’. You can check the domain attributes of each function in the Tell me what function. For example, if you search for ‘Tax’, you will see the following: ‘Report & Analysis’ is displayed to the right of the Tax Register and Tax Exception functions. You can also see that these two functions are listed in the ‘Go to Report and Analysis’ group.

Let’s also check ‘Administration’. The Human Resource category before selection is displayed as follows: ‘ There are a number of features that contain the word ‘Employee’.

This is a screenshot of selecting ‘Administration’ and searching for features in ‘Employee’. Unlike when I selected ‘Report & Analysis’, the ‘Administration’ group is not visible. Now let’s click on ‘Show All’ in the ‘Go to Page and Tasks’ group.

Some features of the Administration area are now displayed. On the left side of the image, you can see that the Human Resource category corresponds to the functions classified in the ‘Administration’ area.

The explanation of the changes in the feature is as written above, but let me give you some historical background. This feature is actually a revival of a feature that BC’s previous version, NAV, had.

In NAV, there is a button called “Department” in the lower left corner, and when you click on it, you can see the functions grouped by categories such as Finance and Sales. For example, if you click on Financial Management, you can see…

Then, the functions of the General Ledger subcategory will be listed. Each function is almost the same as BC.

Then, only the functions in the Finance & Management category with the attribute ‘Report & Analysis’ will be displayed.

This time, two buttons have been added to show the ‘Report and Analysis’ and ‘Administration’ areas. My personal guess is that the ‘Lists’ and ‘Tasks’ buttons that existed in NAV may also be added to BC in the future.

By the way, the position of the Expand/Collapse button in the Role Explorer screen has been changed. It’s a small detail, but it has been improved.

It makes me a little happy to find changes that are not listed in the Docs, lol.
I hope you will try to find out more.

Thank you for reading.