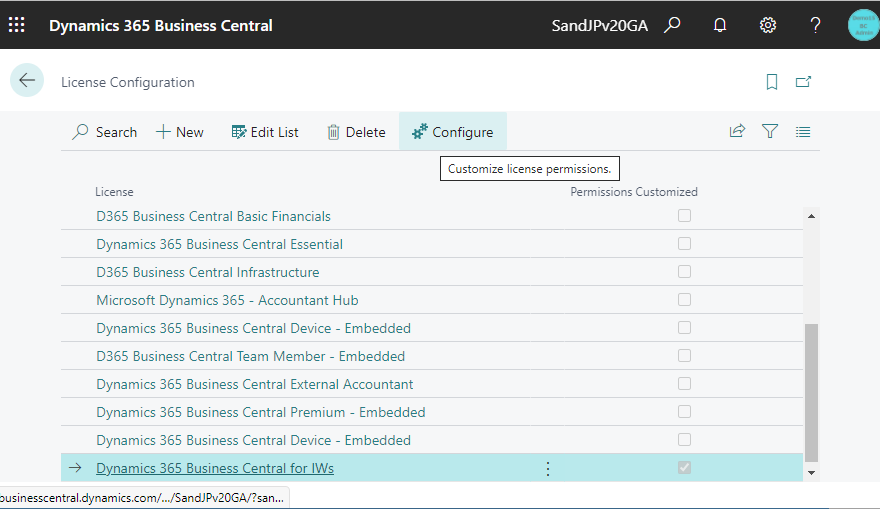 Check the M365 Admin Center for the D365BC license that the tenant has. We will use a free trial environment for this explanation. The tenant has a license “Dynamics 365 Business Central for IWs” as shown below. There are many other BC licenses available. Generally, if you purchase from a partner, “Dynamics 365 Business Central Premium” is assigned to the tenant in most cases.

2. Assign a default permission set and default user group for a license

Licenses are listed. As a side note, this page will detect that a new license has been added. Back to the main topic, select the row for the license you have confirmed in the M365 admin center and click “Configure”.

Create one new user in the M365 Admin Center; assign the BC license (the license for which you just confirmed the user group and privilege set assignments) to the new user.

As a test, edit the following. Delete one of the BC standard user groups and blank the “Company” columns for the remaining two user groups. Then assign one user-defined user group. As a result, the permission sets will look like this

Create a new user. Assign a BC license as before.

Sign in as the newly created user and review the user card. You can see that the user groups and permission sets are assigned as customized above.

User groups and permission sets are assigned when you sign in for the first time, but you can later change user groups and permission sets. You can reset it if you change too many things and lose track of them. For example, you can add Super permission on the User Card page to a user who has just created a new user and signed in. Note that this feature was not added in 2022Wave1, but has existed for quite some time.

After running the process, open the user card and you will see that the user group and permission set have been reverted as configured in License Configuration.

In addition, as you will see when you actually operate as a user administrator, there are cases where you may want to assign WITHOUT Company restrictions during the requirement definition or training phases. Nevertheless, the administrator had to delete the Company column value for each user on a case-by-case basis because any user’s ”Company” would actually be assigned to the user. This change to Wave 1 will eliminate this hassle.

I think this is a very useful feature and I hope you will actively use it.

Thanks for your reading.